As you might guess from the title there has been an abundance of training sessions over the last three days. The list is as follows: light vehicle training, recycling and waste, general fire and safety, environmental field training, MacOps training (communications while in the field), outdoor safety training, and field and support training. Whew!  All of this training coupled with spending time in the lab getting acquainted with instrumentation I will be using for the next month equals a busy couple of days.

While all of this training might seem like overkill at first, I've really grown to appreciate the thought that is put into all of these safety protocols. McMurdo is a small town which swells in size from ~150 during the winter to ~1,000 in the summertime. This large population change is largely due to the influx of scientists coming in from around the world to conduct a variety of experiments across the continent, and the fact that McMurdo is used a staging ground for these endeavors.  Many projects, such as my own, will require transportation by helicopter or plane to relatively remote locations. Therefore, preparing for sudden changes in weather conditions that might leave you stranded in the field for a couple of days is an absolute must! For example, even if you might just be planning a day trip, it is important to bring enough food and warm clothing to last for a couple of days in the event of an unplanned snowstorm. It is also imperative to have a multiple ways to communicate with those back at the base in the event of an emergency or if there is a need for additional supplies. 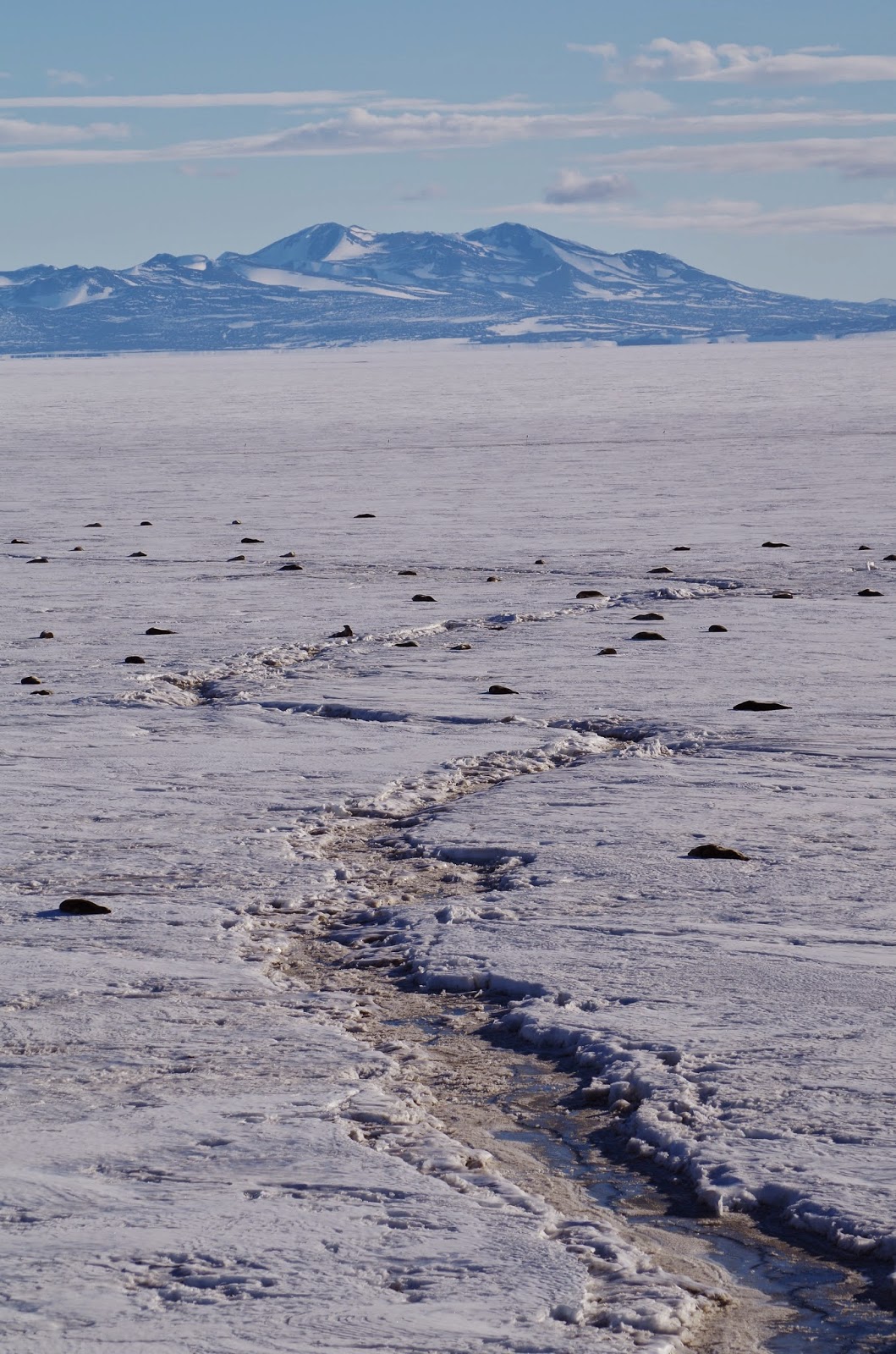 Unfortunately, training doesn't leave you with many flashy photos. Therefore, I’ll leave you with this gratuitous photo of Weddell Seals sunbathing along a pressure ridge (or break) in the sea ice on McMurdo Sound.

Happy New Year!
Posted by Steven Goldsmith at 1:42 AM

(My apologies for the belated post, but there have been some delays due to training and lack of internet access)

Time for the final leg of the journey! Fortunately, the weather cooperated on the morning of the 28th and we were given permission to board our flight. In addition to the scientists I met from the University of Colorado, we were joined by three scientists from New Zealand, two from China, and two from Japan making this a truly international endeavor.  Our plane was operated by a crew of five from the New York National Guard, which felt strangely fitting as I'm a native New Yorker myself.


It took a little while to load the plane as we were not only carrying the our own luggage and scientific instruments but also some resupply for the McMurdo Station in Antarctica. However, it wasn't too long until we were in the air.

Riding on a C-130 was an experience unto itself.  The interior of the cabin was unfinished and a little unsettling at first (Pictures 1 and 2). At the same time, it was interesting to see a lot of the inner workings of an airplane that we don’t normally get to observe.  It was also the coldest flight I’ve ever taken due to the lack of cabin insulation so it was a good thing we were wearing our cold weather gear!

About six hours into our eight our flight, the view was nothing short of amazing. Small icebergs drifting in the ocean began to dramatically increase in size and soon we were observing large chunks of sea ice (Pictures 3 &4). This is the austral summer or summer in the southern hemisphere, and we just passed their summer solstice.
Given Antarctica is located below the Antarctic Circle, there can be more than 20 hours of sunlight
a day during the months of September to March, and for certain portions of the year (including now) the sun stays above the horizon for 24 hours a day.  All of this excess sunlight heats up the seasonal sea ice that forms during the winter months and initiates its melting.

Our destination, McMurdo Station, is situated on the coast of McMurdo Sound, which itself is part of the Ross Sea.  The base is located near the transition between permanent and seasonal sea ice on McMurdo Sound. The permanent sea ice is an extension of a glacier that floats on McMurdo Sound, is much of greater thickness (>250 ft), and does not melt during the summer months. As mentioned above, the seasonal sea ice will typically melt from year to year, although its spatial extent will ultimately depend on how warm it is that given year. With that being said, when looking for along flat runway to land a plane, you probably want to chose an area with thick enough ice to support the weight of an aircraft. Therefore, our pilots chose to land in and area called Williams Field, which consists of a snow packed runway situated well within the area of permanant sea ice in McMurdo Sound.

The landing was incredibly smooth as we landed on retractable skis located on the bottom of the aircraft.  Upon landing, we stepped out onto the ice and what was the most surreal landscape I’ve seen in my lifetime.
Posted by Steven Goldsmith at 12:27 AM

The last 36 hours have been a bit of a blur.  During this time, I took three different flights (PHL-->LAX, LAX-->SYD, SYD-->CHC) totaling over 10,000 miles and approximately 22 hours in the air.  I was a little disappointed to miss Christmas this year as the second flight left Los Angeles at 10pm on the 24th, and due to crossing the International Date Line inflight, we didn't technically land until the 26th, thus I missed the 25th altogether (Maybe next year I can get that Arctic Lego play set). This has left me in the City of Christchurch, New Zealand with only one leg of the journey to go!

Before we take that last plane flight, we had to pay a trip to the Antarctic Support Contract office to get outfitted with cold weather gear (Pictures 1 &2). Many of the items are designed for maximum warmth and therefore can be quite heavy.  As I mentioned earlier, this presents a bit of a problem as you are only allowed to take a maximum of 75 pounds of luggage on the final flight.  Fortunately, I packed well due to the advice of several friends I met in graduate school at the Ohio State University who have previously worked in Antarctica (more on them to come later), and I actually have three pounds to spare!

After watching a series of general educational videos of what we should expect during the coming months (many of which had my friends in them!), we were told what we will need to wear for the flight tomorrow (Picture 3). This amount of clothing might
seem like overkill for an eight hour plane flight, but we will be flying on a C-130, which is a military aircraft with not much insulation (Needless to say, I will not be expecting any inflight service). We also need to be prepared for extremely cold conditions in the event of an emergency.  Finally, this will also serve as a dry run for how I will need to dress when working in the field, so it will be nice to get acquainted with my new clothes.

Probably the most exciting part of the day was meeting other scientists who will also be taking the trip with me tomorrow.  In particular, I met a group from the University of Colorado who will be using a series of instruments to study the ionosphere (an upper region of the atmosphere [~80km – 1,000km above the Earth’s surface] made up of charged particles) .  Their initial research has already shown this atmospheric layer is much larger than previously thought and they are continuing to research its physical properties.

Although I have not yet mentioned it, one of the most satisfying aspects of being a scientist is hearing the questions others are asking about how the planet works.  While we often have these conversations with those who share similar research interests, other times like today, they can be with those from a different field altogether.  Either way, the conversations not only shape our own thoughts about different Earth systems (lithosphere, hydrosphere, atmosphere, etc.) but can also help us to view our own field from a completely different perspective and provide creative ideas on how to move forward.


One thing we all agreed upon is that we are excited to take the final flight tomorrow and get to work! Hopefully, the weather cooperates…

Posted by Steven Goldsmith at 9:01 PM

Although I knew there was a good probability I would be traveling to Antarctica this winter, a lot can happen beforehand that can either delay or cancel the trip altogether (i.e., funding issues, health problems, etc.). Once I got the official word for this winter, I knew there would be a lot to purchase in a relativity short time. Complicating matters is the fact that you are only allowed 75 pounds of luggage, so you need to make sure what you pack will be of use.

Fortunately, you are provided a list with items to bring (see below). Here's an abbreviated version:

At first glance the list might seem a little light, especially if you’re going to spend a lot of time outside in the cold.  Fortunately, the government outfits you with your “cold weather” gear in New Zealand (more to come later).

Furthermore, some items seem straightforward while some others might come as a surprise. For example, thermal underwear, sweaters and heavy socks seem logical while sunblock and sunglasses might not.

Sunglasses and sunblock not only help protect your eyes and exposed skin from sunlight reflected off of snow and ice but also protect you from increased UV radiation in Antarctica. This increased UV radiation is the result of a relative lack of ozone or the “ozone hole” in the upper atmosphere (i.e., stratosphere) above the continent. Under normal conditions, the ozone layer in the stratosphere absorbs most of this harmful incoming UV radiation from the sun, which can lead to skin cancers. We typically use sunblock or sunglasses in the summertime to protect ourselves from the remaining UV radiation that makes it past the ozone layer.

The ozone hole over Antarctica is largely due to excess bromide and chlorine accumulating in the stratosphere from the use of ozone depleting substances (ODP), such as chlorofluorocarbons, hydrochlorofluorocarbons, freons, and halons.  These ODPs are typically used as refrigerants in air conditioners or freezers, solvents, or fire retardants (i.e., chemicals used to put out fires). In the winter time, global winds help these harmful chemicals accumulate in the stratosphere above Antarctica. In the spring time, a reaction between these chemicals, sunlight, and the ozone itself causes it to breakdown. This is bad news as it lets through much more UV radiation than what is expected in normal conditions. Due to this increased risk of exposure to UV radiation, you are not recommended to go outside in Antarctica without sunglasses and sunblock! 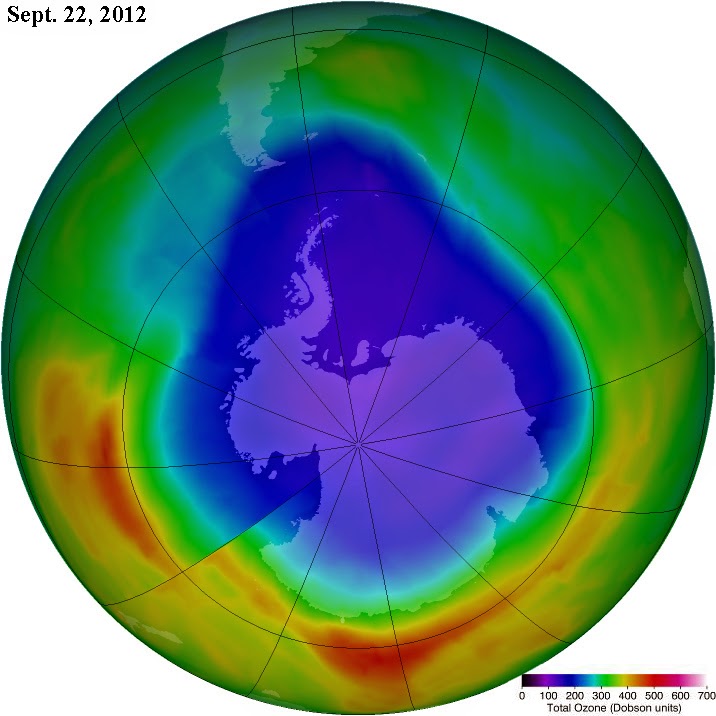 Posted by Steven Goldsmith at 9:28 PM

Steven Goldsmith
I’m an Environmental Geochemist at Villanova University in the Department of Geography and the Environment. My research is primarily centered on identifying and understanding both human and natural influences on water quality. This is meant to be an educational blog detailing all aspects of my journey to the Dry Valleys of Antarctica to study both the magnitude and chemistry of sediments in seasonal glacier melt. If you have any questions you wish to have answered, please send them to steven.goldsmith@villanova.edu.